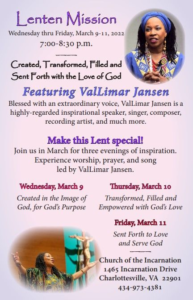 Blessed with an extraordinary voice, Vallimar Jansen is a highly regarded singer, composer and recording artist. she is educated and experienced as a university/college professor, a leader of worship and prayer and a workshop presenter at conferences across the united states and abroad.

Known especially for her work with contemporary Christian music, she sings a wide range of music, including spirituals and traditional, organ-based choral music. ValLimar began recording professionally in 2000, as a guest artist on a number of projects. In 2005, with her husband, she released her first solo CD, YouGotta Move.

ValLimar Jansen has a long history of singing sacred music, starting from the age of five and professionally since the age of six. She received most of her training in music and performance at Howard University in Washington, D.C., and she holds professional degrees in the Arts from California State University and The University of California.

She has sung and toured professionally throughout the United States of America, St. Kitts, Jamaica, St. Maarten, Switzerland, France, Germany, Belgium, Italy, Scotland, Israel and Japan. She played the role of Beneatha, with the Broadway touring cast, in the European premier of Raisin. She went on to co-author a one-woman musical about the life of Ethel Waters that received a special commendation from the Kennedy Center in Washington, D.C.