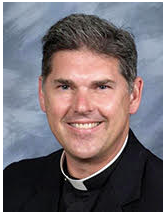 Timothy E. Keeney was born in Akron, Ohio on November 24, 1960. His father, Richard Keeney worked for the Norfolk Southern Railway and this took the family to Saint Louis, Missouri and then to Roanoke, Virginia. It was there that he first met the Redemptorist Fathers. Attracted to their life and mission, in 1975 he began priesthood formation at their Minor Seminary, Saint Mary’s Seminary, in North East, Pennsylvania for high school, Saint Alphonsus College in Suffield, Connecticut for college (B.A. in Philosophy), and Mount Saint Alphonsus Seminary and Washington Theological Union for graduate seminary formation. Leaving formation prior to ordination, Msgr. Keeney attended Washington & Lee University School of Law in Lexington, Virginia. Graduating in 1990, he then joined the law firm of Williams, Kelly & Greer, P.C. in Norfolk Virginia as an Associate. Returning to priestly formation for the Diocese of Richmond in the Winter of 1993, Msgr. Keeney was sent to Rome to complete his studies at the Pontifical North American College and the Pontifical Gregorian University in Rome. He was then ordained a priest in June of 1996. After ordination and additional studies in Rome post-ordination he was assigned as a Parochial Vicar at the Basilica of the Immaculate Conception in Norfolk (1996), and then as Parochial Vicar at Our Lady of Mount Carmel in Newport News, Virginia (1997-2001). In 2001 Msgr. Keeney was assigned to Saint Anne Catholic Church in Bristol, Virginia/Tennessee as Pastor. It was there that he worked with Burwil Construction of Bristol, Tennessee on his first Design/Build project which was a 4.1 million dollar expansion of Saint Anne Catholic School. Msgr. Keeney was then assigned as Pastor to Saint Bede Catholic Church in January of 2013. In February of that year he received the papal honor of being named a Chaplain to His Holiness with the title of Monsignor. Beginning in late 2014 and early 2015 he helped guide the parish through the building process in Williamsburg. He has served on many Diocesan committees in the past and currently serves on the Priests’ Benefit Committee and Priests’ Advisory Council.  Msgr. Keeney has served as pastor of Incarnation since 2019.