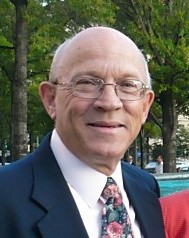 Izzy was born in Holguin, Cuba, and immigrated to the United States in 1961 at the tender age of 15. After finishing high school in Miami, Izzy moved to Connecticut to study history at Sacred Heart University, where he was a member of the first graduating class and where he so happened to bump into his future wife, Lynette. After a stint in Chicago where he earned his MA in Latin American Studies at Loyola University, he returned to Connecticut, married Lynette, began a career as a teacher and a coach, and added the title of “Dad” to his resume with the birth of his daughter, Sumner.  Izzy and Lynette dedicated themselves to Catholic education, both in their professional endeavors as teachers and within their own family, sending their daughter through 12 years of Catholic schooling.

In addition to his time in the classroom and on the athletic field, Izzy served in Catholic institutions as principal of St. Malachy’s School in Tamarac, FL; parish administrator of Our Lady Queen of Martyrs in Ft. Lauderdale, FL; development director at the Catholic Legal Immigration Network, an organization that works to aid immigrants entering the United States; and as both a team member and capital campaign director for two companies, specializing in fundraising campaigns in Catholic parishes and dioceses around the country. In these posts, he facilitated development efforts in churches and dioceses in Virginia, Massachusetts, Connecticut, Florida, Michigan, Georgia, and California. Izzy also served as Director of Development with the Roanoke Valley Chapter of the American Red Cross.

In his spare time, Izzy enjoys the University of Miami football (with apologies to UVA fans), the Washington Nationals, Boston Red Sox, David Baldacci books, his dog with a Napolean-complex, and the company of his wife and daughter.