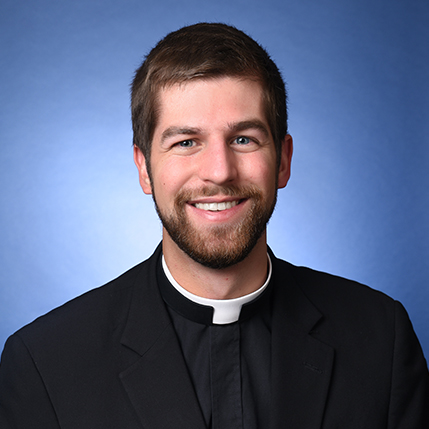 Fr. Chris Masla was raised in a Catholic family, the oldest of 3 boys. His father had a career in the Navy, and the family lived in various places up and down the East Coast of the U.S. until finally settling in Williamsburg, VA in 2003. After high school, he attended Virginia Tech, where he was actively involved in the Newman community (Catholic Campus Ministry) and began to discern a call to the priesthood. After graduating with a Bachelor’s degree in Business Management in 2013 he entered the seminary at The Catholic University of America in Washington, D.C. Fr. Chris was ordained a priest for the diocese of Richmond at the Cathedral of the Sacred Heart on June 1, 2019, and began his ministry at Incarnation in August, 2020.

As a Hokie, it may take some time for Fr. Chris to adapt to living in Charlottesville, but he loves the mountains and the outdoors. In his free time, he enjoys hiking, playing sports, reading, live music (especially bluegrass), and playing the guitar and the 5-string banjo, especially at jam sessions.